Things to watch for with a bathroom remodeling 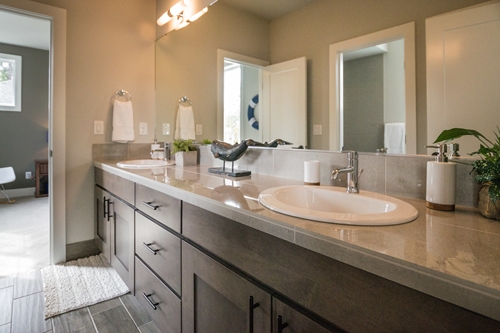 A bathroom is one of the most frequently used rooms in the house. From showers at the end of a hard day to preparing for an important event in the morning and everything in between, the area can get quite a workout particularly if you have a large family.

Because of the importance of the space in our daily lives, remodeling it can take on a special importance. This is largely due to the number of important elements that are connected to the area: plumbing, fixtures, tiling, heating, ventilation, electrical wiring. Making almost any significant change to the bathroom could involve any of these components.

There are several key points to watch for when remodeling a bathroom and a few areas of concern. Here's what to watch for:

With all of the water and moisture that exists in a bathroom, mold is a constant and serious problem. Not only is it unsightly but it can impact the health of the people who live in the home. In 2004 the Institute of Medicine reported that being exposed to mold in a home can lead to upper respiratory conditions in otherwise healthy adults, including coughing and wheezing, asthma reactions in those with the ailment (or to development of asthma in children who are exposed to it early and are genetically susceptible) and hypersensitivity pneumonitis.

In addition, The Washington Post reported, there have been other studies that show some people suffering from chronic lung illnesses can develop mold infections in their lungs.

Signs of mold can include dark spots on walls near baseboards or ceilings, or wet patches on drywall that remain even if the bathroom has not been used. In addition, a musty smell can also indicate the presence of mold. Getting rid of mold is a job that should be left to a professional.

It's vital that the plumbing in the bathroom operate correctly. Even a small problem with the plumbing can lead to something major that could cause expensive damage. A plumbing problem in a bathroom can be as obvious as a continual leak or even a burst pipe, or unsecured pipes behind a wall (a rattling sound when a faucet is turned on might be an indication). In addition, fluctuating water pressure may also be a sign of poor bathroom plumbing.

Hiring a professional plumber might be the best way to investigate any possible problems. It's important to find a plumber who is licensed and insured to do the work correctly.

In addition to the pipes that lead to the bathroom, the fixtures they connect to are important as well. Changing a tub, for instance, can involve making sure it can be integrated into the existing piping system. It can also mean having to destroying an older one; because old fashioned tubs can be made of cast iron, removing one might require breaking it up into pieces to get it out of the room which, of course, means it can't be salvaged and used elsewhere. Installing the new tub can also have its issues such as making sure it fits into the new space and getting it through all of the doorways and other obstacles.

For bathroom cabinets, homeowners have many options to give the room a new look, including knobs, pulls and hinges.

Poor venting can create a lot of problems for a bathroom, particularly if it's in the center area of a home where it might be difficult to install a ventilation unit that can direct the excess moisture outside. According to Angie's List, it's not hard to tell if you have a bathroom ventilation issue: if you turn on the shower and the room fogs up (including mirrors and windows) and excessive moisture collects on the walls, you might have a venting problem. In addition, if it takes more than a few minutes for the room to clear of the mist and moisture, that could also be an indication of a venting problem. Not only can it create a situation where mold grows, it can damage the structure of the bathroom itself.

SFGate stated that the moisture that develops from the lack of ventilation can ruin the walls of the room, including the paint and the wallpaper. The problem could be as simple as a blocked or broken vent fan or as complicated not having a fan in the room at all. It might be possible to install a fan, but depending on the location of the room in the house, it could involve more extensive construction work. There are a number of venting options you can choose from to keep your bathroom comfortable.

A remodel can also involve a complete redesign, and determining whether your new plans will work in the space that you have. Houzz suggests you might want to install two sinks to replace the one the originally existed in the bathroom. Or you may choose to add an enclosed glass luxury shower where a tub formerly stood. And to warm up that cold floor, having heating elements installed under those tiles might be the answer. Your redesign may also include the look of the room itself, such as taking it from traditional to vintage or modern. Determining if what you want works in the space you have is an important consideration.

Creating the bathroom of your dreams involves careful planning and the help of a remodeling professional. If you're ready to explore your options, Amerhart is here to help. Contact us today.